Projection Versus LED for Event Displays 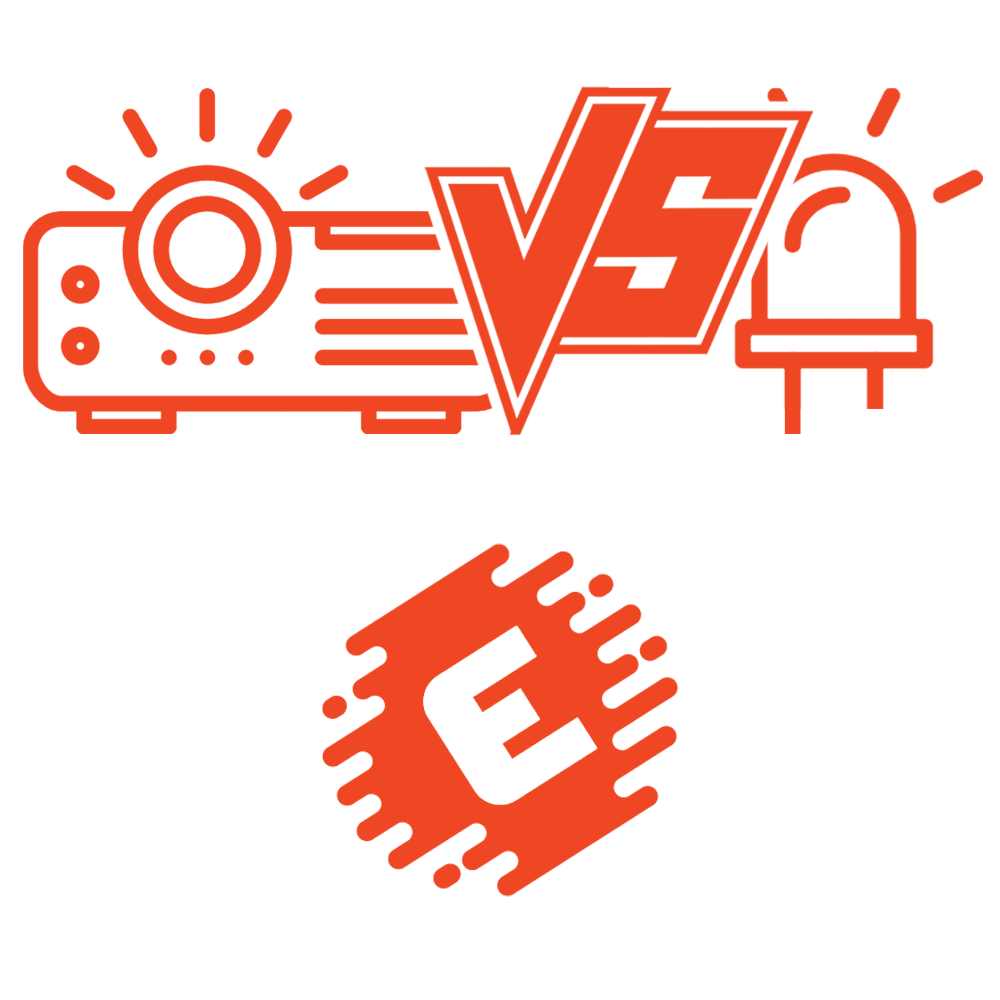 Picking the right display for the ultimate WOW factor

Projection has been the gold standard in event displays for decades – but recently, LED has started making waves. What is the difference between these two options? What are the benefits and limitations of each? Most importantly, how can you determine which is the right choice for your event?

Many of us first encountered a projector in grade school classrooms – but projection has been around much longer than that! Projectors with moving images became popular in the late 1800s, and as technology evolved and visuals became increasingly digitized, the uses for projectors have only expanded.

“Slide projectors were more common than video projectors when I started in this industry”, says Dave Jensen of Encompass. “In fact, one of my first jobs was designing static graphics that were sent to a glass slide developer and then projected using classic carousel projection units.”

By the late 90s, digital projectors started to replace film units in movie theaters and made their way to event facilities shortly after.

Projection became, and has stayed, so popular because it is a relatively approachable and affordable option. Clients have used them, likely for years, so they understand how they work, and understand some of the limitations they may pose to the event set up (such as where the projector needs to be placed).

How does projection work?

While many people know what projection is and have experience using it, they don’t understand how it works.

In its most basic form, projection consists of four key components: a light source, such as an arc lamp or laser-phosphor engine; a panel to create an image, which can include translucent LEDs or arrays of tiny mirrors; a lens, which determines how large the image will be and adjusts to focus of the image; and a surface that the visuals are projected onto. This surface is most often a projection screen but can be virtually anything (see our blog post projection mapping to learn more).

While projection is widely known, there are many misconceptions surrounding it. One of the most common being that people can’t walk in front of a projector without distorting the image. Fortunately, when it comes to events, this typically isn’t true. While some projectors are placed in front of the surface, making it important not to block the image, most events feature projection behind the surface, referred to as rear projection, which allows presenters to walk in front of the screen without limitation.

Another misconception is that projection isn’t as good as LED or doesn’t have as high of a resolution. This, of course, isn’t true. The resolution is determined by many more factors than projection vs. LED, such as the resolution of the original visuals and the deployment of the on-screen content. In fact, on small surfaces, resolution is much higher when using a projector.

There are many benefits to using projection – cost being a leading consideration. Depending on the deployment, projection can cost up to five times less than LED displays.

Weight is another important factor. Many facilities have unrealistic restrictions when it comes to suspending event equipment from their ceilings, making LED much more challenging to implement.

Projection also has some incredibly unique, interesting, and impressive capabilities that LED doesn’t. Projection mapping has become a popular trend, and with good reason. Rather than using a screen, projection mapping allows visuals to be projected directly onto any surface, such as a building, structure or even bodies of water, completely transforming the space.

Despite its benefits, there are also clear limitations with projection, the most notable being how it is affected by ambient light. No matter how bright the projection is, ambient light will dull the effects of the visuals. Obviously, this means that projection cannot be used outside during daylight, but even light spilling in from facility lighting or stage lighting will render the projectors ineffective.

While LED (Light Emitting Diode) was discovered in 1907 and had its first commercial applications after World War II, it’s still considered a relatively new trend in the live event space.

LED became more commonplace in the 90s, when it began being used in retail and public signage, but the cost, weight, and power consumption needed to use it limited how viable of a solution LED could be.

Now, however, LED is everywhere. From giant displays on roadside advertisements and stadium concert tours, to point of sale kiosks, LED is a go to option inside the event space and out.

LED is a physical structure comprised of individual tiles (typically one half meter each). Each tile has a specific number of individual pixels, which determine the overall resolution of the finished display.

Similarly to projection, LED displays can be deployed in any aspect ratio, with the only limitation being the dimensions of the original visuals.

Why has LED become popular?

The biggest selling point to LED lies in its brightness. While projection cannot be used in locations with a large amount of ambient lighting, LED is relatively unaffected, even by direct sunlight. The brightness of the screen is very flexible, allowing LED to be used and visible in a variety of different environments.

Additionally, LED is known for its rich colors, including deep blacks that projection simply cannot achieve, giving many visuals an extra punch.

People are also attracted to LED because it is such a modern event solution. Corporate and entertainment personas love to leverage technology – or the aura of technology – to define their brands as innovative and cutting edge.

Event staffing and equipment remains very similar, regardless of whether the event is utilizing an LED display or projection. In both scenarios, pixels need to be processed, and experts are needed to program where those pixels go.

When it comes to LED, weight can be a huge challenge – and a limiting factor. Indoor deployments are subject to in-house rigging rules, some of which may not allow the amount of weight necessary to use an LED display. Meanwhile, outdoor use is dependent on the structure being used to hold everything up.

LED can also be challenging when an event has a shorter set up or load-in time. Giant displays take time to set up – and can be difficult to troubleshoot if any issues arise.

What display is best for my event?

When deciding between projection and LED there are a few key factors to consider:

Projection and LED are two staples of the event industry, each with its own benefits and limitations. If you aren’t sure what display is best for your event, reach out to your technical partner to learn more!

At Encompass, we have unique backgrounds that situate us perfectly to produce high end and complex offerings. We’ve worked in broadcast television, touring entertainment, live sporting events, and countless convention facilities across the country.

We have technical design experience and a disciplined process in place that allows us to easily scale events and shift from in-person to virtual without angst. There isn’t much that’s beyond our scope and we love the intensity of putting on events!

If you’re a planner working to create an event, seeking help with virtual event technology, or simply want to learn more … we can help! Sign up below to receive our updates (we promise to keep your contact information secure and won’t “overshare”).

The Facts About Scheduled Payments Models

Projection Versus LED for Event Displays